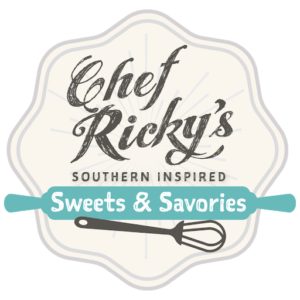 Owner and chef, Ricky Davis believes the most flavorful dishes come from the heart, and of course only the freshest and finest ingredients. Every dish is tailored to what is in season to ensure every bite is delicious and diverse. Give your next event a little flair by ordering some of our delectable hors d’oeuvres. We have all kinds of plattered and hot and cold passed hors d’oeuvres that are sure to please any palette. Our food will certainly give your next event that sense of elegance it deserves. Whether you are trying to plan a corporate outing or a wedding, allow us to show you what real Southern hospitality is like!

Raised in North Carolina and trained in one of New York City’s finest culinary schools, Ricky Davis draws upon his Southern upbringing as the inspiration for his love of cooking. His businesses, Chef Ricky’s Southern Inspired Sweets & Savories and South End Catering, are located in Montclair, New Jersey. Chef Ricky’s expertise was featured in the premiere edition of Soul Food magazine in a feature article, ‘Preparing a Romantic Dinner for Two.’

After establishing a successful career in the information technology field in Washington DC, Chef Ricky co-founded, Spice Catering, as his first culinary venture which served the Washington, DC metro area. While rising in the ranks of corporate America, Chef Ricky’s love of cooking never waned. Armed with six years of catering experience, Ricky completed his formal training at the New York City Institute of Culinary Education in 2006.

An internship at the Ryland Inn, a New York Times 4-Star restaurant and Zagat’s Survey Top Restaurant in New Jersey, provided the culminating experience in Chef Ricky’s training. Ricky perfected his craft by working with the best of the best!

Have a Special Request?